Review: Once The Musical 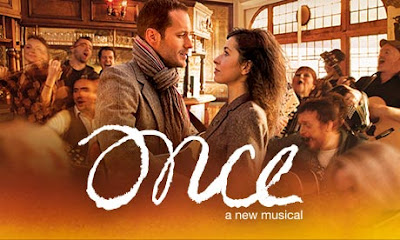 There were 2 theatre shows I was desperate to see during my summer trip to London town. The Book of Mormon, which I wasn't fortunate enough to get tickets for (I'm still cursing that lottery!!) and Once. I had read quite a lot of reviews about the show, but I had to go and see what everyone was raving about first hand.

Set in Dublin and based on the film of the same name, Once tells the story of love and friendship  when an Irish busker meets a Czech mother and fellow musician by chance in a bar. The pair bond over their love of music which sparks a connection that neither of them could have predicted.

From the get go I knew Once wasn't going to be your typical show. As I entered the theatre I was met with an on stage bar with the cast in the centre playing Irish folk songs. As I joined them on stage equipped with my Once cup (god I love gimmicks) I couldn't quite believe what was happening. This was a great example of breaking down barriers and really involving the viewer.
The highlight of Once for me was the cast. Zirnka Cvitešić was the perfect choice to play 'Girl', she had the dry humour and sarcasm of the character nailed while Declan Bennett excelled with his portrayal of 'Guy'. The ensemble was packed to the brim with talent playing some of the most colourful and likable characters on the West End. You've heard of a triple threat, but these guys go one step further and play all their own instruments. It was a real treat to see. Though the set was simple, the use of mirrors which encircled the pub gave me the feeling that I was experiencing every moment and emotion wherever it was happening on stage. Coupled with the captivating music this created one of the most intimate stage productions I’ve seen.

There is no fairytale ending here, and I did leave the theatre wondering how it all turned out. However that's the beauty of Once – it leaves the story open for the audience to answer their own questions. What more can you ask from a piece of theatre?
Grab your tickets here