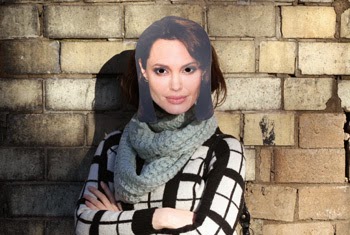 My first experience of the Glasgow Comedy Festival took me to the CCA for Star Stricken - a double bill of one-act comedy plays exposing celebrity.

Kicking off proceedings was 'Emily Entwistle' written and directed by Karen Barclay.  The piece follows consultant Elfrida as she attempts to lead a business workshop with brand manager Margo whose company is facing a public relations disaster.  The pair strike up an unlikely bond by channelling their late idols Emily Bronte and Peg Entwistle.  The snappy writing and fast-paced dialogue made for an entertaining act although at times I found the business jargon a bit on the heavy side.

Next up was Tom Brogan's hilarious 'Good Times Never Seemed So Good' where we joined unemployed Mark who is full of good ideas, but struggles to find a lucrative one to help long suffering girlfriend Laura pay the bills. Mark has a light bulb moment that he will make it big on the local tribute scene impersonating Neil Diamond, and what follows is a comical journey to find out what's really important to him. Mark shares some genuinely touching scenes with vulnerable Janis Joplin tribute Pearl, and his relationship with Laura is familiar and credible without ever becoming clichéd.

Both plays were original, witty and well acted. The chemistry between the small cast coupled with spot-on writing and comic timing made for a welcome addition to the festival.